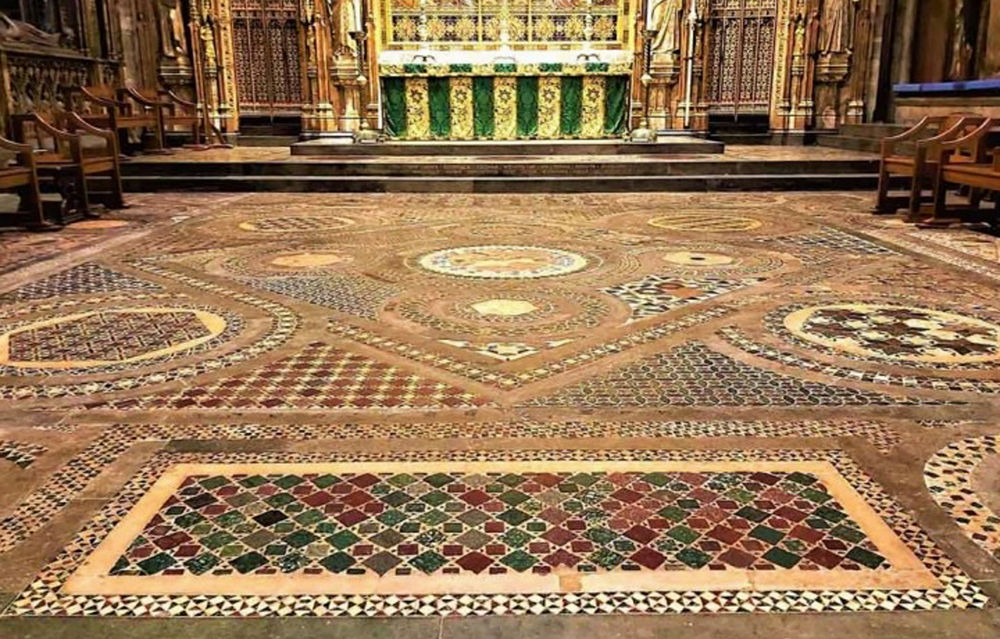 Ancient mosaic art dates back to at least 250CE and flourished in Roman and Byzantine times until modern days. In the 4th-11th century A.D., laying out marbles of different sizes, shapes, and colours to show form and depth created these geometric patterns. This Byzantine method was further developed in Italy from the 11th century onwards by using additional materials to create more complex design patterns. This latter technique was formed of elaborate inlays of small triangles and rectangles of coloured stones and glass mosaics set into stone matrices or encrusted upon stone surfaces.

It was referred to as "cosmati" or "Cosmatesque", named after a Roman family, seven of whom, from Lorenzo to Jacopo, from Deodato to Giovanni, were skilful architects, sculptors, and decorators of geometric mosaics. Their mastery has been handed down in Rome for four generations through the 12th -13th centuries and, until now, fascinates eyes and captures emotions. In the Middle Ages, their craft was beyond the boundaries of Rome, stretching as far as the High altar of London's Westminster Abbey, on which no less than 38 kings and queens have been crowned. 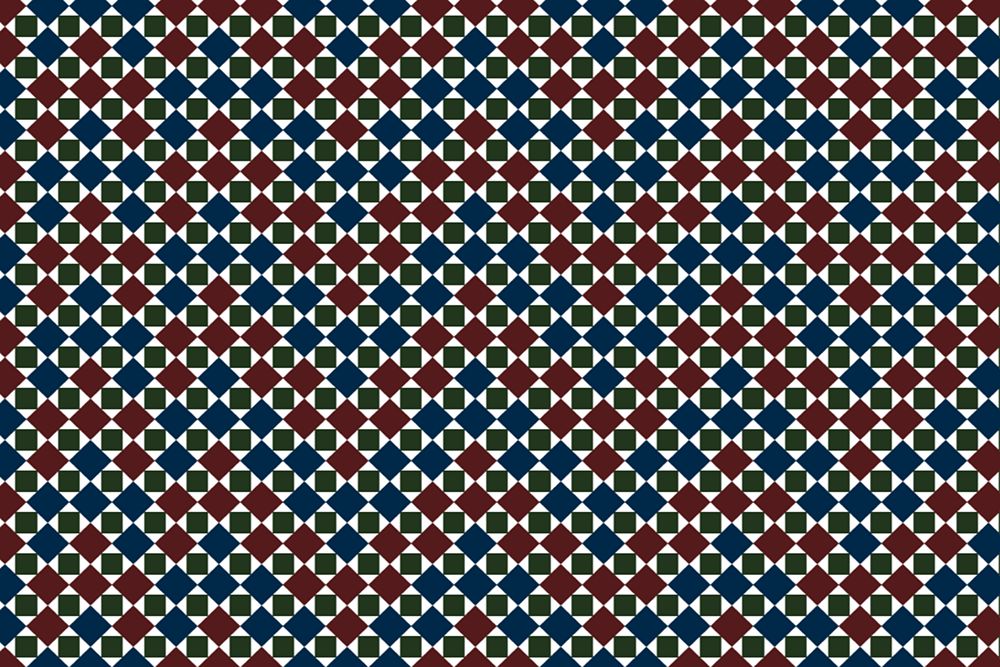 All pattern designs used in our bags and accessories have been inspired by floor mosaics and intricate wall decorations borrowed from the architectural masterpieces of the Roman and Byzantine era. My goal is to revive these historic mosaics, particularly "cosmati" mosaics, through outstanding craftsmanship, ethical practices, innovative design, contemporary functionality, and the finest materials. These meticulous works of art should never be forgotten, nor does the story of all who created it.

MARK / GIUSTI's external look is minimal and shows a remarkable business imprint. Internally, a passion for architecture and geometrics is inspired by the most famous Cosmati mosaics on a journey from ancient Constantinople, via Venice to Ravenna through Rome and then back to London to the intricate floors of Westminster Abbey (pictured above), which was the inspiration behind the London Calling collection print (Picture on the right) and our signature mosaic leather (Below). 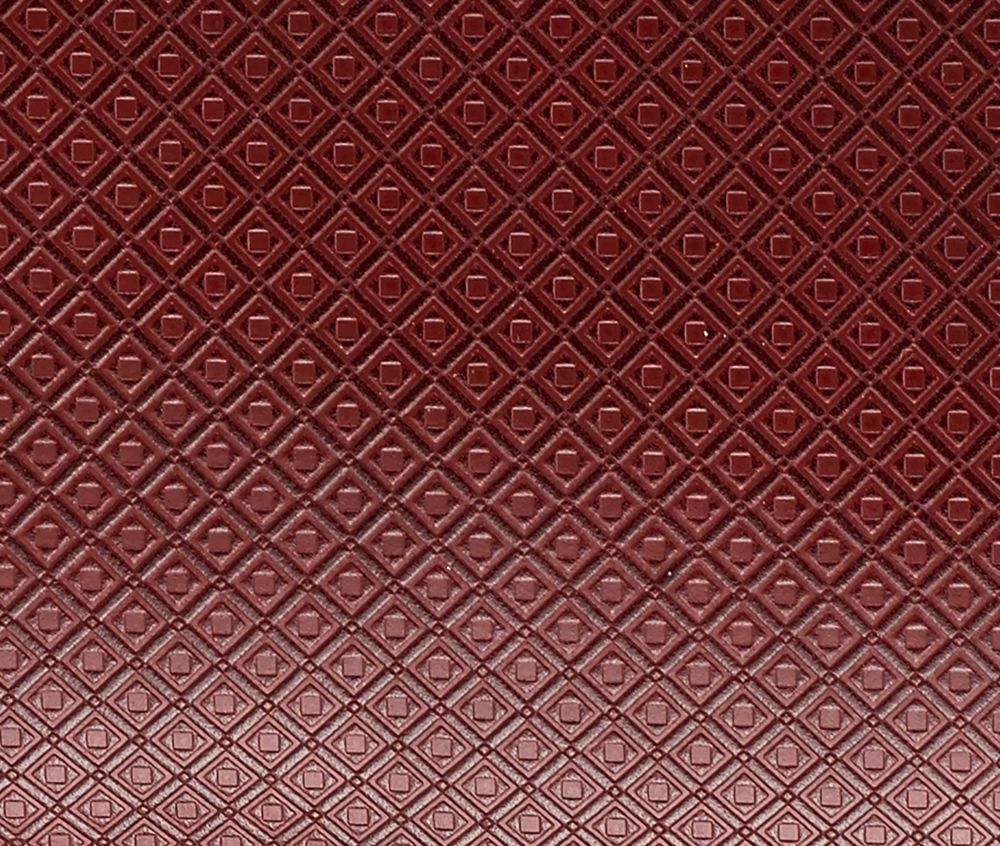 MARK / GIUSTI's external look is minimal yet unique, with our signature leather designed and developed exclusively for MARK / GIUSTI with custom-made colours. I wanted to give the leather the same textured, layered feeling you get when passing your hand over these cosmati mosaic masterpieces, whose characteristics include a similar layering texture. It shows how these geometric mosaic designs become alive through textured leather that you can see and feel.

This is revealed by the finely embossed and debossed artistry that reflects our dedication and commitment to bringing to life mosaic artwork in beautifully crafted functional masterpieces of timeless elegance, quality, and functionality. 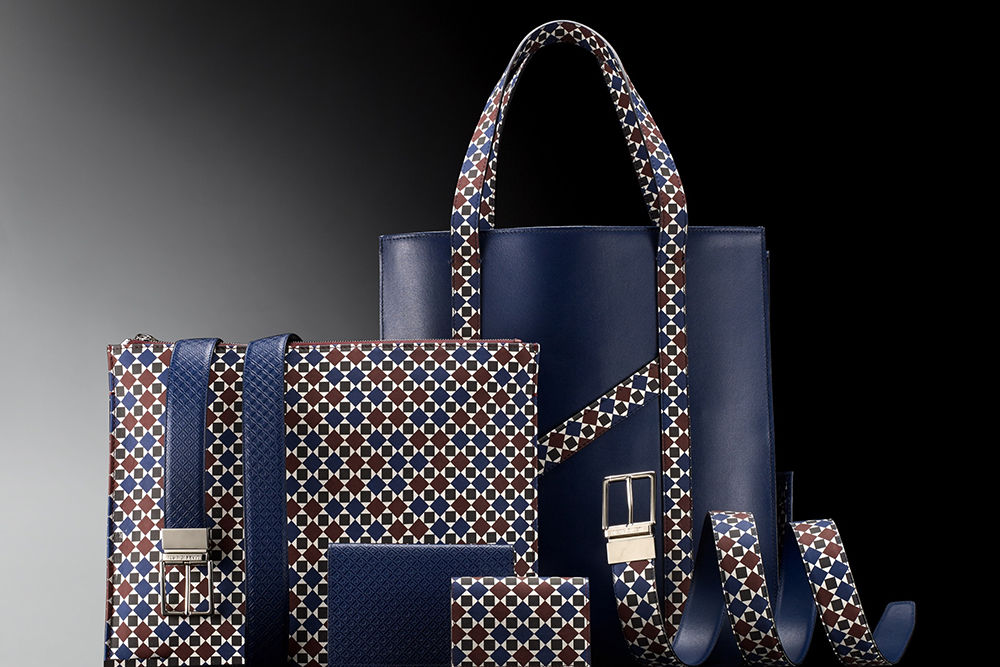 MARK / GIUSTI’s first collection in 2009 was called “Bring Back Time”. Its name revealed my vision for reintroducing the beautiful Cosmati mosaics into everyday life through our handcrafted pieces that accompany us on our travel adventures, work trips or just a day out in town.

Every piece and every collection I create complements the one before it. To me, it has a story, a timeline, and a progression. There is a step closer to balanced perfection and functional travel. The result is consciously created artistic masterpieces of timeless elegance, quality and attention to detail.
Enjoy 10% off your first order
Signup and be the first to hear about new collections and special events
Subscribe
×